No Teaser by BigHomie Chosen

Whatever you might be expecting from a track named “No Teaser”, what you get is probably right on point. The new release from artist and rapper BigHomie Chosen is infectiously rhythmic and undeniably upbeat. Arriving just in time for the end of the season, hopefully, the good vibes and laid-back sentiment will keep listeners and fans of rap and hip hop music alike feeling joyful for a little while longer.

As is only ever the case with rap music that has been masterfully crafted and polished, this is the sort of project that you can, and most definitely should listen to at high volumes. The increase in pace and intensity as things progress is immensely euphoric, it instills within you a feeling of urgency – as the beat picks up, the industrial energy of the soundscape follows, and the whole thing takes over you like an almighty hit of intoxication. And it doesn’t stop there. Submersive creates and completes this piece of music without a single moment of carelessness or filler. The strength of the music is unwavering, as is the skill and certainty with which it has been mixed.

The music is deeply rhythmic, ambient, and captivating at every step, but much more than this – the creator presents a series of moments, of stories and ideas, all of which come through by means of these structurally complex compositions. Each new piece comes complete with unpredictable samples, sounds, effects, and snippets of spoken word that add a further level of intrigue and drama to an already compelling and incredibly satisfying audio experience.
The rhythm of the piece is the heart of its appeal – it’s fairly safe to judge a song by its title in this case. No Teaser has something about it that just screams rap and hip hop, the sort of track you can easily hear being played over and over on mainstream radio and dance floors alike. It’s music to make your move, the music you’ll remember and recognize after hearing it just once. It’s music to make you feel good, and yet it comes through with a touch of swagger and character that suggests there’s much more to come from the creative behind it. 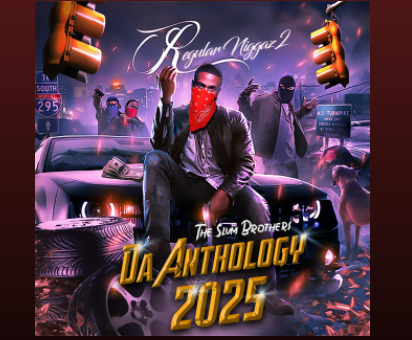 Regular Niggaz by The Slum Brothers