“Teni Vicio” is a huge song by “Ti Santos”, the perfect introduction to the Superbig sound and hopefully the start of something special. You listen to a lot of songs during the day, but then when you hear something that is absolutely, unquestionably performed with passion and emotional power, it hits hard. The rap energy of it is succeeded only by the sheer magnitude of the hook and the strength with which the lead singer and the accompanying voices deliver it.

Ti Santos’s “Teni Vicio” makes for a beautiful introduction to the artist’s music and songwriting for those who are yet to stumble upon it. The delicacy and evolving warmth of the song creates the perfect rap ambiance within which listeners can find themselves calmed and comforted. Ti Santos’s voice leads with a certain softness that appears undoubtedly genuine, and with that comes an inclination to really listen to the lyrics – at which point the authenticity of his writing and his whole approach to creativity reaches even greater heights.

There’s a refreshing touch of nostalgia to this track, though admittedly those two terms don’t generally go well together. It’s refreshing in that it feels new, relevant to now, exciting. It’s nostalgic in that there was once a time when the musician commonly utilized this approach to express similar feelings. What’s clever about this song is the way the set-up underlines the concept, adding to the freshness. The introduction explodes into life, the verses fall away a little, laying bare an almost spoken-word style vocal part, then the hook smashes into action – though it’s only the distorted chords and the vibrant vocal melody that give it weight; the music fall back to half the pace of the verses, just for the start of the other parts.

I’m a fan – this is different, but it works. It’s refreshing to hear something a little left of the expected. The remix effectively offers both nostalgia and the birth of something new. It also presents listeners with a welcome reminder of the classic rap Mode approach to music and performance, the likes of which just aren’t found all that often in modern music. There’s a sense of seductive drama to it all, the essence of which Ti Santos has captured pretty perfectly. 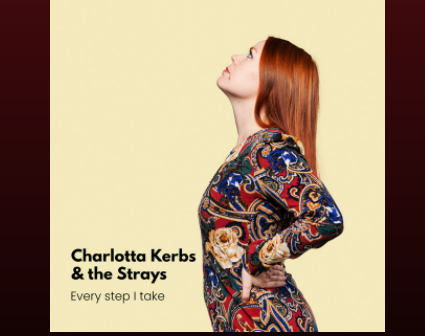 Every Step I Take by Charlotta Kerbs & The Strays