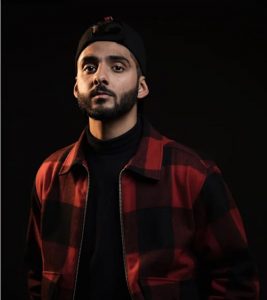 Nick Sharma’s synth-based electro-pop EP “Extrovert EP” is already released with four exciting music tracks. Energizing melodies and strong and confident vocals will let you dive into a different universe within 12 minutes of your time.

Nick Sharma is a Norwegian rapper that gained somewhat of a buzz at the onset of his recording career when he released his debut album Beautiful Space (2015). The album showcases his versatility as an artist, combining densely packed, conscious lyrics with a wide variety of genres, including Hip-Hop, neo-soul, jazz, and even EDM. Features from Norwegian notable guest appearances by the likes of Anders Nilsen (Salsa Tequila) and Nils m/skils (from the worldwide battle scene) helped establish Sharma’s presence in the Oslo music scene.

Inspired and influenced by Nas, Michael Jackson, Drake, Azaelia Banks, and Moon Boots, Nick creates music out of various genres, mixing and making new music which is intriguing. He has released his latest album, “Extrovert EP”, recently and planning to release two more albums,  Introvert EP and a full-length album in the coming years.

The album starts with the featured song “Slow Down”, which is energizing, straight, and full of expression and emotion—completed with so many electro beats, tones, synths, and vocals that it is unbelievably appealing. All the tones, vocals, and beats are interconnected to the music perfectly, which proves the versatility of Nick Sharma. His voice is so confident that the vocals alone can uplift the listener into the euphoric electronic warmth of pure energy.

The next song you will come across is “Come Over”. “Come Over” flows at a slower pace than Slow Down that progresses over time. It is shined with alluring synths and electro tones; this song will finish before you sink into the music deeply. Come Over is more like supper to the entire album.

Then comes the song “Mad/Cool” with bass and muted beats that can induce you to a euphoric state. Computerized synths show you an imaginary dream, and electro tones can move you to its rhythm subconsciously.

The last addition of Extrovert EP is “Timelines”, with slow rapping parts. The song flows on an infectious hook that is memorable and shined with male and female vocals from the beginning until the end. The synths are mellow, and the song is filled with electro tones, as expected.

Out of all four songs, “Slow Down” stand out because of its versatile music. Slow Down alone proves that how talented is Nick Sharma. We expect more exciting music varieties in his upcoming albums of him.