Offering up one of the most enjoyable single releases of the summer so far, New York City-based artist Anthony Sierra’s “Answers” is a brilliantly warm and uplifting piece of music and writing with an instrumentally organic bounce to it. Anthony Sierra is an American Singer,Songwriter, Producer, and Guitarist. Anthony Sierra has used his many influences to create his own sound mixing acoustic guitar with Pop, Hip-Hop, Folk, and punk and he has released his new single ANSWERS on June 01,2022.

“Answers” is a simple but brilliant song – not often can an artist write such a catchy hook and not have it irritatingly burrow its way into a listeners’ consciousness. On the contrary, this track leaves its mark in the way that any great indie pop hit from back in the day would. It’s hopeful, lightly energizing, and it gives you that instant gratification of something you can sing along to or move to or simply vibe to from the offset.

Things start off in a fairly mellow manner – though the soundscape is full and vibrant from the offset, the energy falls away to make room for Anthony Sierra’s gentle vocals and reflective lyrical honesty. The set-up lets every changing sentiment shine beautifully. The detail in the verses has a touch of melancholy about it, though the rise up to the chorus deals more with what’s been learned – what’s needed to move forwards, what’s next. Then the hook itself explodes into life, the singer’s vocal abilities move effortlessly from the subtle to the mighty, and the passion of the song really stands tall at this point.

Musically, the whole thing has so much power – the various building blocks walk hand in hand with the song as it develops and evolves. The hook is simple and memorable, effective and emotional, all of which you can hear would work well as a solo performance, but that in this case is given additional strength thanks to a thoughtful and flawless production job. 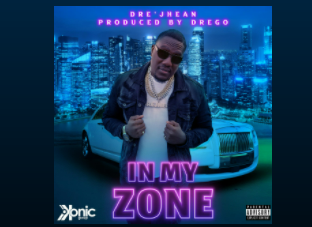 In My Zone (Radio Edit) by Drejhean